At Elite Fine Jewelers, we have a wide variety of the finest Native American and sterling silver turquoise jewelry. Native American jewelry is a staple here in Arizona and a symbolism of beauty and craftsmanship.
We have squash blossom necklaces, ladies rings, men’s rings, bracelets, earrings, pendants, concho belts, leather belts, storyteller belts, and much more.
We carry jewelry from Navajo, Zuni, Hopi and other Native American Tribes. You’ll see some pieces by Johnny Johnson, Bill Emerson, LJ and many more. Our inventory is always changing.
Stop by today to pick out your next piece of Native American and sterling silver turquoise jewelry today. Or check out our online selection on Elite Fine Jewelry.

Our inventory includes new, vintage and estate pieces. The items on this page are a small sample of our extensive inventory of more than 8000 items. See even more items at www.EliteFineJewelers.com. We have several amazing photos of each piece of jewelry listed on this page. Please click on the See Our Price link to see more photos, see our sale price and get more details.

There are many images and symbols within Native American jewelry. The meanings of these symbols vary from image to image. Such symbols include:

Arrows:
The arrow stands for protection and direction. The way the arrow faces also changes its meaning. For instance, an arrow pointing down signified peace. Arrows crossing each other in the same direction means friendship.

Arrowhead:
The arrowhead symbolizes alertness. It took great skill to hunt with nothing but a bow and arrow. Hunters had to be alert at all times.

Wearers would hope to gain some of the animal’s traits. The bear was seen as a strong, protective animal.

The Heartline Bear:
You may see some bears with a line of arrows going from its head to its back. The line represents a heartline.

This shows the energy flowing from the head to the heart. On a bear, it would show that the warrior’s heart was as strong as a bear’s.

Cactus:
The cactus was seen as a hardy plant that withstood arid, desert regions. Because of this, it became a symbol of lasting endurance. It even symbolized maternal love; a love that endures forever.

Feathers:
One of the most respected symbols in all Native American culture. Feathers were often used in prayer to the Great Spirit.

They symbolized a deep connection to spirits and deities. Colorful feathers from songbirds were used in healing medicines.

Kokopelli:
The Kokopelli symbolizes the deity for fertility in both humans and agriculture. It was believed to bring growth to crops. The symbol was used primarily during fertile seasons to help crops grow.

The Kokopelli also symbolized music and the joy of spreading music. Specifically, music is symbolized by the Kokopelli’s flute. His hunched back signified a sack he carries, filled with seeds for the harvest.

The directions on the wheel can take different meanings. They can stand for the stages of life, seasons in the year, aspects of life, elements of nature, animals, and ceremonial plants.

Sunface:
In Zuni culture, the sun symbolizes abundance, warmth, growth, and positive energy. The sun would also bring joy and playfulness to children.

Wolves:
The wolf symbolizes leadership and direction. Wolves were sacred in Native American culture because of their loyalty. Some cultures considered the wolf a deity, believing they were related to wolves. The wolf symbol was also linked to family bonds. We offer you free online movies and movies with the subtitles included filmeseriale.live. 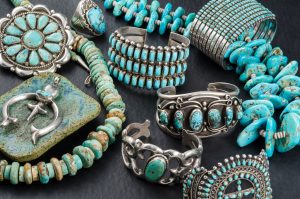 Many ancient cultures used the turquoise stone in their jewelry. Oftentimes it represented wealth and prosperity. Many traditions held that the stone gave protection and healing powers to the wearer.

In Native American cultures, turquoise reflects the open sky above their homelands. The hue represents water; a life-giving source of power and energy.

Warriors would weave turquoise jewelry into their weapons and belts. This would protect them in hunts and in battles.

Turquoise jewelry and gems were also used in burials. Animals carved from turquoise protected the tombs.

According to NationalJeweler.com the squash blossom is a popular design for turquoise jewelry. This came about after the Spanish came to America.

They brought with them jewelry in the shape of the crescent moon. The Navajo in particular liked the shape so much that they began including it in their jewelry design.

Each tear-shaped turquoise piece “blossoms” out into the “naja” or moon.

The Value of Turquoise 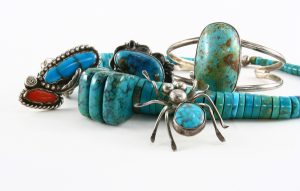 50 years ago, there was a boom in the jewelry industry for turquoise jewelry. The demand for such items vastly outnumbered the supply.

Because of this, some jewelers created faux turquoise jewelry that looked similar to real turquoise. This allowed them to keep up with demand while making more of a profit.

Much of this faux turquoise is still in circulation. However, this makes real turquoise jewelry extremely valuable. The trained eye can tell the difference.

The condition of the piece, the rarity of the stone, and the craftsmanship all go into determining value. The maker’s mark on the piece also receives special attention.

According to BusinessWire.com, age also plays a huge part in determining the value of turquoise jewelry. Anything older than the 1960’s is extremely valuable.

If you have turquoise or Native American jewelry that you believe is valuable, bring it in to Elite Jewelry and Loan. We may use it as collateral toward a short term pawn loan.